As one of the engineers working on our next-generation platform in the Bet tribe of Sky Betting & Gaming, I was tasked with choosing an overlay network for our container scheduler (we’re going with Kubernetes but that’s a story for a different post). But just how do you choose an overlay network for a platform when you don’t know exactly what will be running on it yet? Here’s how I went about it, some stats and some conclusions I came to.

What is an overlay network?

Look out for a further post about container schedulers and why we chose Kubernetes in the Bet tribe, but effectively an overlay network allows containers to appear as if they are on the same network even though they may be running on different machines, even in different datacenters. You can think of it as a VPN between containers without the encryption overhead (you can even have encryption on it but most people don’t.)

What are the options?

It turns out there are a wide variety of overlay networks to choose from and they all have different characteristics. The current networking model for containers (e.g. Docker and Rkt — CoreOS’ similar product) is called CNI and theoretically any overlay network that is CNI-compliant can be used in Kubernetes. The first wave of cutting down these networks is by ease of install — If I’m going to be testing networks en masse, I don’t want to be spending days installing a network tech to find it’s not suitable.

This meant a much smaller list to benchmark — the ones that had kubeadm* addons that can be installed quickly on a disposable cluster. This list is :

*kubeadm is Kubernetes’ rather clever “setup wizard” type tool which allows you to set up a Kubernetes cluster extremely quickly.

Requirements other than performance

It turns out, other than the ACI nice to have, the three we whittled it down to all cover those if you add the Calico policy model to Flannel.

How do you test network performance?

I have learned everything I know about networking by osmosis and doing. This puts me at a disadvantage when it comes to network performance because that’s usually “Somebody else’s problem”. Not this time; this time it’s mine. Oh well, that just makes it a learning opportunity!

Having done a fair bit of reading and looking at the tools available to test the various networks, I settled on the fine tool iperf3 which specifically allows us to measure using UDP and measure jitter (which I knew to be a bad thing, but didn’t have a good grip on what it was before reading about it).

To ensure that the test was across availability zones* in Amazon (profile for worst-case, it can only get better!), I used a container replica set of 3 on a kubernetes 3-worker cluster with each worker in a different availability zone. *Availability zones (AZs) in Amazon are theoretical boundaries between it’s “datacenters”. Theoretically, no more than one AZ will ever be down at once but it does create network overhead.

I then ran iperf3 as a UDP client and asked it to attempt to transfer 1, 10, 100 megabits/s and 1 and 3 gigabits/s to give a range of data for each overlay network. Also for comparison, I did the same test for AWS instances without an overlay network and a test in one of our non-cloud datacentres.

One of the things about running on AWS is that the instance size makes a difference to the network throttling that Amazon apply, so I ran the Weave test and the plain AWS networking test a second time, running on an m4.xlarge cluster rather than an m4.large.

The final thing to note in terms of methodology is that these networks have all been tested with out-of-the-box settings, specifically the settings provided by the addons linked to on the kubernetes addons page. I’m sure that tuning and tweaking these network addons would provide different results, however, there are not enough hours in the day to work through all the permutations. As always, your mileage may vary and you should not assume that these results apply directly to your setup.

The raw output of iperf3 output looks somewhat like this :

I tabulated this data per Network and it looks like this :

Some (not so pretty) graphs : Max Speed Acheived 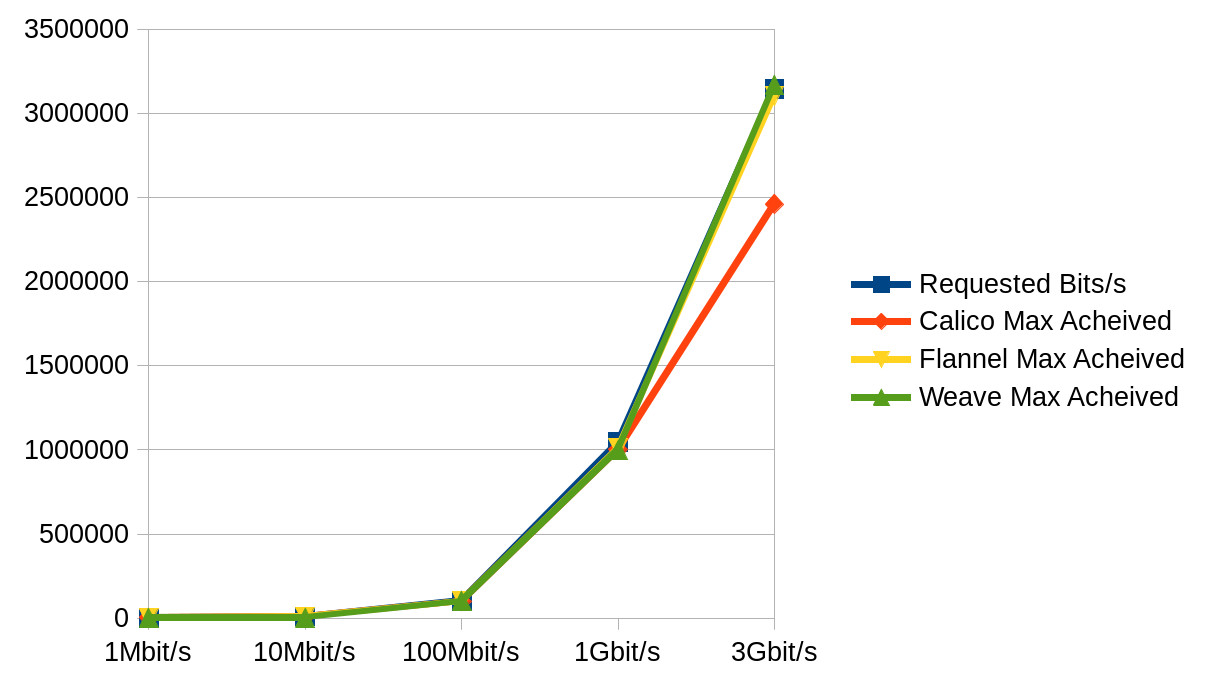 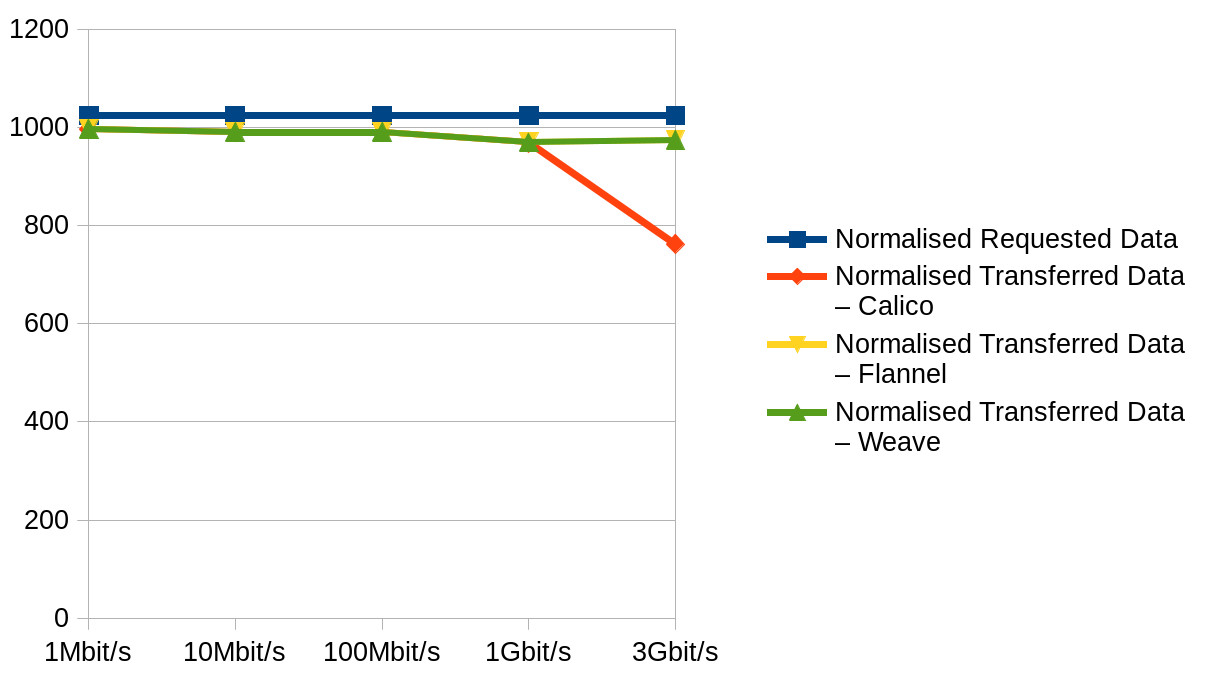 It turns out that making graphs of summaries in Excel (LibreOffice really) doesn’t do much for the presentability of highly technical data.

Given our current setup is Kubernetes on CoreOS ContainerLinux and ContainerLinux default is Flannel overlay and Calico policy, what we have decided to do is… nothing! The exercise has shown that all the mature overlay networks are similar performance-wise with the exception of Calico, and there’s no compelling reason to switch.

If you are looking for which you should use in a different scenario and have no preferences, I’d recommend Weave, but purely because I had a struggle to get Flannel to work using the addon model and calico topped out first at transfer speed.

Want to read more about Infrastructure? Check out these related articles...

Turns out driving Infrastructure with code via APIs isn’t that scary after all for your ageing engineer, it’s actually fun!

Together with our partners at Turbonomic we’ve put together a video about how we optimise our highly virtualised platform.